This is how Human Design works.

The neutrino is an elementary particle, an electroneutral lepton, coming from the stars, and in our solar system the Sun interacts only through weak nuclear interaction and gravity.
The neutrino mass is important to explain the “dark matter” phenomenon in cosmology, as it is possible that the neutrino concentration in the universe is high enough to affect the average density.
Near the Earth, about 65 billion (6.5 × 1010) solar neutrinos per second pass through every square centimeter perpendicular to the direction of the Sun.
Neutrinos are formed by various types of radioactive decay, including beta decay of atomic nuclei or hadrons, nuclear reactions such as those that occur in the heart of a star, during a supernova, or artificially in nuclear reactors, nuclear bombs or particle accelerators. etc. Most of the neutrinos near the Earth are from nuclear reactions in the Sun.

On the day of our birth and three months earlier, we have received a specific rain of neutrinos which has passed in a specific way through each planet of our solar system. system and the Moon before it touches us with its life-giving imprint.

Each planet is a key to our device and reveals to us the mechanisms that have shaped us and given us our energy imprint for a lifetime.
Human Design reveals our individual energy imprint.

More about the Neutrino: https://en.wikipedia.org/wiki/Neutrino 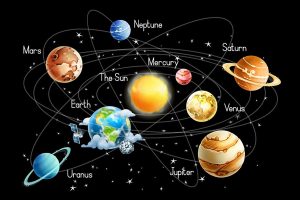